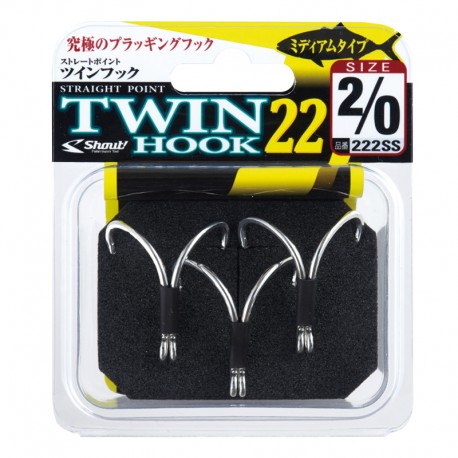 ● The treble hook is the best hook for efficiently hooking the target near the lure that is the target of predation. However, there are disadvantages when it comes to big-game fishing. Since three hooks are structurally fixed by brazing, each hook is thin and easily stretched or broken. If the wire is thickened to make up for the weakness, the hooking rate will naturally decrease. In addition, it becomes heavier and the movement of the lure becomes worse. Further, since it is fixed by brazing, a load or twist from the lateral direction is likely to occur depending on how it is hooked on the target, which also causes stretching or bending. Although the fish hits, it often comes off during the fight, which is partly because it is fixed.● There is a single hook as an option to make up for the disadvantages of treble. If the weight is the same as one treble hook, a thick shaft can be used in the case of a single hook, so the advantage in terms of strength is great. Another advantage is that once hooked, there is little baldness. However, as a disadvantage, the hooking rate is undeniably reduced.
● Then, how about a double hook? It is lighter than treble and can be used with a slightly thicker shaft. The disadvantage is that two are fixed like the treble. As mentioned above, the disadvantage is that it breaks, stretches, and easily breaks. In addition, there is a demerit that the hook is oriented to the left or right when attached to the lure with a split ring.In this way, each of the treble hook, single hook, and double hook has advantages and disadvantages.
If you try to make up for one of the disadvantages, a new disadvantage will be created. The angler must determine the hook in consideration of the target fish, bait, lure size, tackle balance, etc.Shout there! The "twin hook" was positioned as the final evolution.
The two hooks tied together by the split ring retain the shape of the double hook with heat shrink tubing. When attached to a lure, it does not turn sideways and can maintain a position where it is easy to hook. Once the target is hooked, the two hooks respond independently depending on how they are hooked. When a strong lateral force or twist that deforms the hook is generated, the heat-shrinkable tube tears and prevents the hook from being deformed or broken. When it reaches the limit, it changes to a single hook. There has never been a plug hook that changes according to how the fish is pulled.
The "twin hook" can be said to be a hook system that has overcome the disadvantages of conventional plug hooks.
This twin hook system will become the world standard for big games in the future.
And shout! "Twin hook" will support your lure fishing.