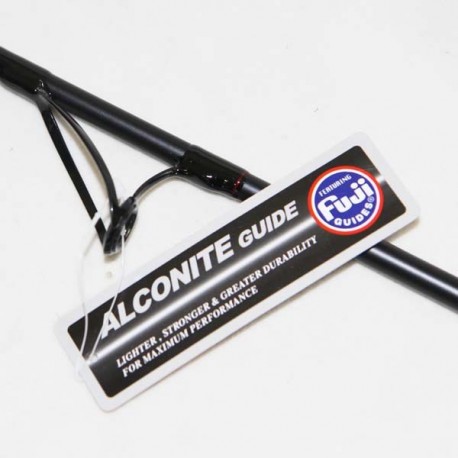 • Japanese Toray Carbon T800H
• Tensile modulus of 42 msi
• Polymer matrix resin system
• Taper fast
• Parabolic fighting curve (Egi configuration)
• Two piece construction
• Infinite fit – wearable ferrule
• Fuji Low rider ALC guides
• Fuji reel seat
• Hand turned & finished eco cork reel seat
• Monogrammed hard outer case
• Inner cloth bag (with Velcro ties).
Our Japanese suppliers had been telling us for years about Egi rods, but then the revolution, or evolution of Squid fishing happened! Some where along the path, the “penny dropped”. Squid are and end in themselves and not a means to and end. Squid are not just bait, or a good feed they are a worthy adversary deserving of specialist equipment.
Fortunately at LOX much of our design and innovation is shared with our Japanese colleagues. In Japan Egi fishing has long been the province of highly skilled and dedicated specialist Squid Anglers. We quickly came to the realization that “reinventing the wheel” would produce little so we “huddled down” with our Japanese partners and produced the 2-5kg Egi rod, 100% pure Japanese Hi-tech. Australia’s first true state-of-the-art Japanese Egi rod. Following that initial release was the 2-4kg Egi. This was done to meet the differences between the “shape” of Australian and Japanese coastlines and the corresponding differences in the sea floor between the two countries.
The final objectives in Egi fishing may differ between Japan and Australia but the aim of getting as many Squid on-board as quickly as possible is held in common. Irrespective of your personal goal, be they for live bait, or for the table. If you want to get these lovely cephalopods under control as quickly as possible the LOX Egi is the answer.